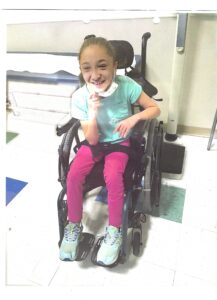 Meet 11-year-old Alyssa. She was diagnosed with cerebral palsy. She has endured more than a dozen surgeries, including a failed procedure on her hands. She cannot  or stand without assistance. Alyssa tries to put these and other obstacles aside to remain positive.

Alyssa, also known as Ally, has several interests. She likes watching YouTube videos about animals and babies. Her favorite film is the classic Turner and Hooch, as well as other movies featuring dogs as the lead characters. Her favorite outdoor activity is horseback riding and horse therapy. She also used to compete in a Special Olympics soccer team. Ally has fun dressing up and being glamorous. She aspires to be a magazine model for people with disabilities—Ally got her wheel in the door when she was featured on a billboard advertising her local hospital. She will succeed at her goal, too. Ally is resilient and determined. This beautiful girl is the unstoppable force against her roadblocks. Keep an eye out for Ally. She might be seen on a magazine cover with a grand smile that says, “I did it!”

Ally needs a bathroom modification to make bathing easier and safer. Part of the modification will be simple handrails. Please be her sponsor!