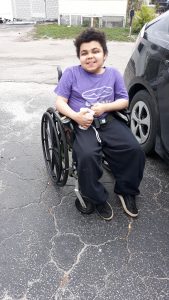 Meet 13-year-old Aaron. His dedicated parents noticed that their son was not developing normally compared to other children his age. Aaron underwent numerous genetic tests and it was not until he was 11 years old when doctors finally diagnosed him with Duchenne Muscular Dystrophy. He declined quickly after his diagnosis. Aaron lost his ability to walk—he can only move independently by scooting around on the floor if needed. Aaron, despite his limitation, remains a happy and inspiring young boy.

Aaron is best described as being a cool kid. He enjoys watching New England Patriots football and loosens a thunderous cheer whenever they cross the line into the winner’s circle. He listens to a variety of music, but his favorite is rock and roll. He likes relaxing by playing video games, especially Minecraft and Jurassic World Revolution.  Aaron is also a hard-working student and he cannot wait to perform experiments in science class. Aaron enjoys going out with his family, and his first choice is to eat lunch at Red Robin. Buy him a hamburger and fries, and he will be your best friend for life. Buy him an extra helping of French fries and he will be your best friend forever! However, being Aaron’s buddy does not take much effort. People are drawn towards his kindly heart. He often has a joke to make people laugh. He is frequently up for an adventure, whether it means exploring mysterious  tunnels or gazing at beautiful waterfalls and wondering what is on the other side? Clearly Aaron is awesome, but he can be compared to one of his most beloved comic book characters. One is a hero in fiction, while Aaron is the hero in our lives. He is the real Iron Man.

Aaron needs a manual wheelchair to provide him with independent mobility. Please be his sponsor!