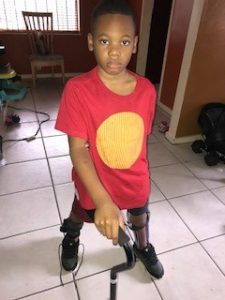 Meet eight-year-old André. In 2018, he was diagnosed with a degenerative disorder known as Guillain-Barré syndrome. The illness causes the immune system to attack the nerves. André’s legs have been affected because of the condition. Currently, he walks using a cane and leg braces. André, despite the relentless illness, remains happy and positive.

André enjoys several pastimes. He is a fan of the Marvels Spiderman movies. He reads comic books, too.  He listens to a variety of popular music, but his favorite artist is Lil Nas X. When André was attending school, he was always eager to learn more about science. The young boy has a growing rock collection that will soon be large enough to climb. He loves playing with his new six-month-old puppy, Emery. The waggy-tailed dog keeps Andre active throughout the day. André, most importantly, has a strong determination to get better. He loved riding his bicycle, but the ability was lost due to his progressive disability. He said to his teary-eyed mom, “Don’t worry, I’ll ride my bike again!”

André needs an adaptive tricycle to help strengthen his legs. It will also give him the confidence he has lost. Please sponsor André!