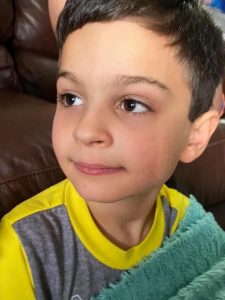 Meet eight-year-old Andrew. He was a typical boy who was vibrant and talkative. His parent’s eventually noticed that he was regressing and losing abilities.  Andrew underwent extensive tests. He had a general diagnosis of Autoimmune Encephalitis, but doctors are still unable to pinpoint the exact cause of the young boy’s problem. Andrew’s parents are frustrated with the situation. His dad said, “We don’t know what  is going on.’ The boy’s challenges, however, are clear. He has a compromised immune system.  He can no longer  verbally communicate. He might be cognitively developed, but his disability seems to keep him trapped in silence.     Andrew was asked if he would like to talk. He was only able to nod his head. Andrew also has difficulty walking. He has low muscle tone and poor balance. He is cheerful despite this tragic change in his life.

Andrew has a variety of interests. He watches Disney musicals, including Beauty and the Beast and Pinocchio. Years ago, when Andrew was healthier and able to leave home, he enjoyed car rides with dad and listening to 50s and 60s rock and roll. The music still makes him smile, though. He follows his favorite local hockey team, the Silver Bears. He likes being outdoors, too. Andrew could not wait for recess when he was able to attend school. He is always eager to take walks with his family. Andrew frequently grabs his dad’s hand and pulls him towards the door as if to say, “Let’s take advantage of a beautiful day and go for a stroll!” This is an example of Andrew’s upbeat personality. He shows a playful side by being a jokester and laughing at his antics. He is a great big brother to his sisters, and the adore him with all of the love in the world. He is best known, however, for being determined. The setback in Andrew’s life has not stopped him from being an awesome kid. He is aptly named. In many cultures the name Andrew means brave. In Andrew’s world, he defines one more thing. Inspiring.

Andrew needs an therapy trike to improve his leg strength, balance, and stamina. The trike will also be an important tool for him to play outside since his immune system is compromised and he cannot be with friends. Please be his sponsor!