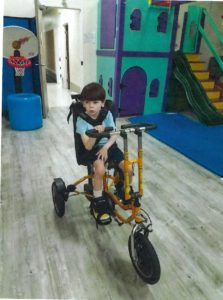 Meet six-year-old Henry. He has been a remarkably  healthy boy despite  having cerebral palsy and congenital hypotonia. The illnesses cause a variety of complications. Henry is mostly nonverbal, but he uses technology to help him communicate. He has muscle weakness on his right side and in his legs. Henry, however, uses a walker and is mostly independent. He never allows these challenges to keep him from moving forward.

Henry has several interests. He enjoys listening to country music by Brad Paisley.

He watches the popular show, Paw Patrol. Henry is a huge fan of Disney’s Cars, especially Mater! He has a collection of toys from the film and also enjoys the movie’s soundtrack. He likes going outdoors when the weather is as inviting as a welcome sign. He especially loves swimming or playing in a bounce house with his sister. One of Henry’s favorite activities is that he always wants to cuddle. He is a snuggable and huggable little boy. His family is always there to pick him up, too. Henry’s name is appropriate; it means ruler of the home. Henry, however, is the ruler of our hearts.

Henry needs a Rifton tricycle to improve his leg strength, stamina, and balance. He will also have a great time riding on his trike.