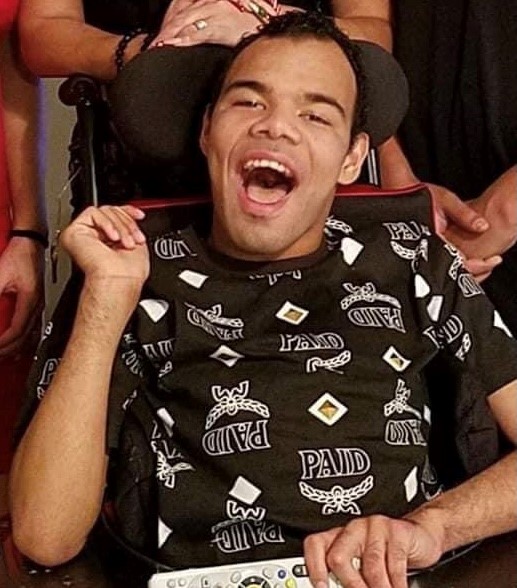 Meet 20-year-old Jaycob. His mom was 30 weeks pregnant when she suffered a traumatic injury. As a result, Jaycob was diagnosed with cerebral palsy and hydrocephalus. He is cognitively challenged and nonverbal. His spine is completely fused, and he also suffers from muscular spasticity. He cannot walk or stand unless using a gait trainer. Jaycob, however, remains delightful despite his tragic beginnings.

Jaycob has several pastimes to make his day fun. He loves watching the Wiggles and Mickey Mouse Club House. He listens to songs from the latter show and even learns how to follow instructions given in the lyrics. If a song says, “Raise your arms,” Jaycob follows along as if he was playing a Simon says game. He likes playing with balls or toys that light up and have music. He uses his gait trainer to take walks around the neighborhood. Jaycob also is a hard-working student from the school Nina Harris. He is about to graduate and his family is bursting with pride! Jaycob’s mom describes him as “my wonderful and beautiful angel!” Jaycob is proof that the darkest tragedies can turn into the biggest blessings!

Jaycob needs a therapy tricycle to improve the overall health in his legs. These improvements will also enhance his ability to use the gait trainer. Please be his sponsor! 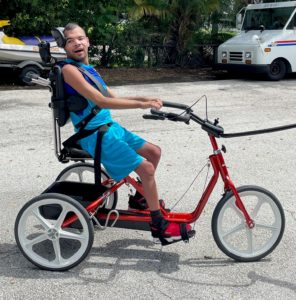 Look at Jaycob strutting his stuff as he rides down the block in his very own therapy trike! Jaycob received a Rifton Therapy trike that will help him build his leg muscles, core strength and work on his balance and coordination. It’s a great way to have some additional PT but most of all it’s fun!