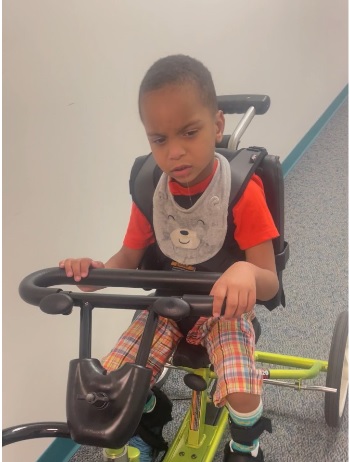 Meet four-year-old Jesse. Sadly, his life began with numerous struggles. He was diagnosed with cerebral  palsy a week after his birth. Two weeks later a g-tube was inserted. He has many issues with breathing and spent the first two years of his life in and out of the hospital. His adenoids and tonsils were removed to help with his breathing. Jesse has more challenges. He does not have any independent mobility. He is also nonverbal. This boy’s list of trials can continue, but he remains miraculously happy despite his limitations.

Jesse has an array of fun pursuits. He watches the animated tv series for kids titled Super Why. He likes it when people with soft voices sing to him songs. He listens to books that have exciting sounds. Jesse also enjoys going to the park and playing on swings. Jesse used to be socially active, but Covid now keeps him isolated from his friends. He cannot wait to see his buddies again. Jesse is very calm and kind, too. His smiling face makes our world a better place.

Jesse needs an adaptive tricycle to improve the leg strength, stamina, and mobility. The trike will also be a new way for him to play outdoors. 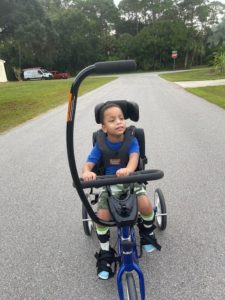 Jesse loves his new trike! With many thanks to his sponsor, Athletes Helping Athletes, Jess is now able to wheel himself around his neighborhood and ride alongside his friends! Riding his trike will now give him increased leg strength and the freedom he so wanted to enjoy being outdoors!