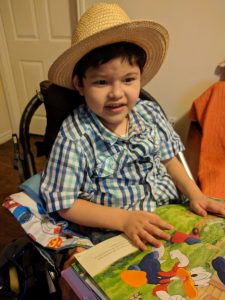 Meet two-year-old Ariel. Sadly, he was born with a difficult illness known as Esophageal Atresia. This condition creates an abnormality in the esophagus that makes eating more than a challenge. Ariel, as a result of the illness, always vomits if he makes the slightest movement after eating. He had surgery two days after birth. Unfortunately, the procedure caused three brain hemorrhages and Ariel never recovered. He has cerebral palsy and numerous struggles to overcome. He spent nearly the first two years of his life in the hospital and endured pneumonia 14 times. Ariel’s lungs have been devastatingly damaged because of the pneumonia. Ariel also suffers from hypotonia and poor balance—he has even fallen when using an adaptive stroller and other chairs. Ariel, however, remains remarkable even with these seemingly insurmountable trials.

Ariel has several fun pastimes. His favorite movie is Disney’s Cars and loves the spinoff tv series title Lightning McQueen. He sings along to a variety of music. In fact, Ariel has a supernatural memory and he can quickly memorize lyrics to most songs. He enjoys playing with his collection of toy cars. Ariel also is an enthusiastic student in virtual school. Ariel’s best aspect is not his interests, but his personality. Ariel’s family describe him as noble. He is an obedient boy with a peaceful demeanor. He is never without a smile or a happy dance. In short, Ariel, even with his illnesses, is perfect in all the ways that inspire.

Ariel needs an activity chair to provide greater support while eating. The chair will prevent him from moving and eating will be easier and safer. He will also be able to interact with his family without the possibility of falling. Please be his sponsor.