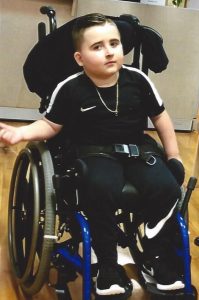 Meet seven-year-old Kenneth. This brave boy was only two years old when he and his family were in a   tragic car accident. Kenneth suffered from a traumatic brain injury and became a paraplegic. He is unable to walk. Learning is also a challenge. Kenneth is a great kid and overcame his challenges.

Kenneth has a few interests. He watches television shows about animals, but his favorites are ferocious dinosaurs. Similar to most kids, he also enjoys playing video games. He has fun interacting with family during an exciting Monopoly game, too. Kenneth is also surrounded by two of his best friends; he has a couple dogs that never leave his side. Kenneth has other interests, but a great personality is what defines this boy. He is very compassionate. He attends therapy sees other children who are struggling with their own challenges. Kenneth cheers them up by bringing the kids presents or simply being a good friend. Kenneth is responsible and mature. He helps with chores and reminds mom to get items on her grocery list. He is very loving to his family. He shows them affection by giving endless amounts of hugs and always saying, “I love you!” Meet Kenneth. He had a tragic start in life, but he was never a victim. Instead, he became a hero.

Kenneth needs a roll-in shower to make bathing easier and safer. Please be his sponsor!