Meet eight-year-old Landon, who was diagnosed with cerebral palsy. The illness has given this little boy several challenges. He spent nearly the first year of his life in the hospital. He is cognitively delayed and his ability to speak is limited. He has poor muscle control in his upper body. Landon also cannot walk without using his gait trainer, and even this is difficult. He remains happy despite these limitations.

Landon enjoys numerous activities that make his day fun. He has a high-pitched screech and contagious laugh when watching shows like Paw Patrol and Bluey. He bonds with his dad by watching soccer games on tv. He listens to children’s songs, such as Baby Shark, It’s Raining Tacos, and Chicken Nuggets—these songs will get stuck in your head! Landon also has a loyal pet named Pablo who is training to be a service dog. Landon is known to be always cheerful. His smile never fades. He reaches out to people to give hugs and kisses. In short, meet Landon and instantly fall in love with an angel.

Landon needs a tilt wheelchair to provide better comfort and a way to change his sitting position and prevent pressure sores. This will promote better health. Please be his sponsor! 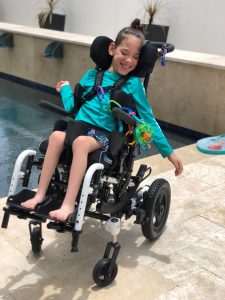 Landon received updates for his wheelchair making it much more comfortable for him but, most importantly, much safer for him as well. Mom sent us a note saying she couldn’t believe how much the updates had improved his posture and his overall happiness. Since he is better seated, he is happier!

We just love stories with such a happy ending!