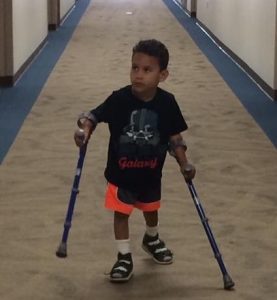 Meet 7-year-old Alex. The young boy  was eight months old when his family noticed that he was not reaching typical milestones. He was eventually diagnosed with Spinocerebellar Ataxia,  a degenerative disorder in the brain that can affect multiple systems. Alex is cognitively challenged as a result of the illness. He also has poor balance and difficulty walking. He uses assistive devices, including a walker, to be independent. Alex, despite his limitations, is joyful and determined to have a great childhood.

Alex is best described as fun and assertive. He likes  the exhilaration of fast cars on tv or in films, but his favorite is getting on the Fast and Furious ride at Universal Studios theme park. The feeling of being in a speedy  car makes him laugh beyond the finish line—He immediately  wants to do it again. If Alex could drive, he would probably race towards his preferred restaurant, Macdonald’s—he cannot go by the golden arches without wanting their delicious French fries. Alex, most of all, is very social. He likes playing with cars or looking at books with his family. If they are with him, Alex is content. Alex knows what he wants. His biggest desire is to be encircled by the love of his family.

Alex needs a Rifton tricycle to improve his leg strength and stamina. He can also have a great time riding on the trike. Please be his sponsor!