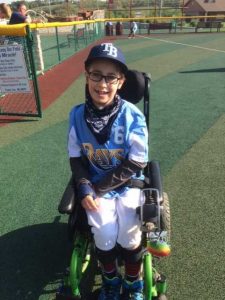 Meet nine-year-old Benjamin. He was born a healthy baby until days later when doctors noticed the child had cataracts. Months afterwards mom discovered that her son was not reaching developmental milestones. He was eventually diagnosed with cerebral palsy. He now has many challenges. Benjamin endured eye surgeries and an operation on his legs. He is nonverbal. His motor skills are also impaired, and he needs help with daily tasks. He is joyful and determined despite his illness.

Benjamin is a cool kid. He listens to classic rock, and his favorite is The Rolling Stones. Play the super group and he will dance in his wheelchair as if nobody is watching!  Benjamin also enjoys horseback riding. He even participates in the Miracle League, a baseball program designed for disabled children. Benjamin gets frustrated that he cannot participate in other activities with his peers. However, he is resolute to make his life a grand slam hit!

Benjamin needs a wheelchair lift for his vehicle. Currently, he needs to be transferred into the car. The task is more difficult as he grows with age. A new lift can make travelling easier and safer. Please be his sponsor!