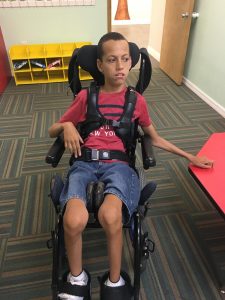 Meet 16-year-old Donald. His life began in tragic circumstances. He suffered from oxygen loss during his birth. This resulted in having cerebral palsy. He endured multiple surgeries and his longest hospital stay was two weeks. Donald needs assistance with many tasks. He is also unable to walk. Furthermore, Donald is nonverbal. He is very happy despite these trials.

Donald is interested in several fun activities. He watches the Madea movies and loves Family Guy on television. He nods his head and wiggles while listening to R&B music. He has a pet dog and they are best friends. Donald is even adventurous; he likes the thrill of mudding and exhilaration of airboats. Donald and his family share their journey together. And, his radiant smile lights their way home, even  in the darkness of disease.

Donald needs a manual wheelchair to give him more independence. Please be his sponsor!