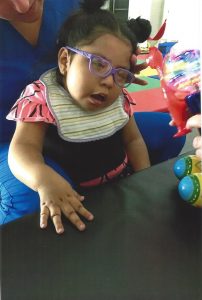 Meet five-year-old Janely. The little girl was born in Ecuador where a parasite caused a life threatening infection. The infection caused Congenital Toxoplasmosis, a devastating condition that is the catalyst for other illnesses and symptoms. She was also diagnosed with quadriplegia, epilepsy and Hydrocephalus. The combination of diseases makes life more than a challenge for Janely. She is cognitively equivalent to an infant and nonverbal. Janely also cannot walk or stand. She has even endured nearly a dozen surgeries. Janely has been blessed despite these trials.

Janely came to the United States where specialists could provide better care. After months in a hospital, Janely was placed in an orphanage. An amazing family adopted Janely when she was nine months old. Janely’s life from then on improved. She cannot verbally communicate but expresses her happiness by screaming and kicking her legs. Just ask mom and dad. She is very joyful! Her favorite thing in the world is hearing people sing. In turn, the family likes singing to Janely just to hear her happy. Janely is described as an angel. Disability and disease are conquered by halos and wings. This is a family of angels and Janely’s blessing.

Janely needs a ramp for her home. Currently, leaving the house is difficult with her wheelchair. A ramp will make it safer and easier to leave and keep doctor’s appointments. Please be her sponsor!