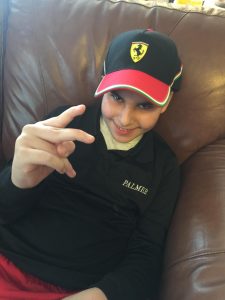 Meet Lazo!  He is a 14-year-old young man who suffers from cerebral palsy and seizure disorder; however, Lazo does not let his mobility challenges affect his sense of humor.  Lazo’s dad says he is quite the joker, as he attempts to tell jokes in his father’s native Kurdish, but the jokes fall flat because Lazo hasn’t mastered the language yet (Dad laughs anyway).  He also loves listening to Kurdish music.   Lazo enjoys watching FC Barcelona matches and Green Bay Packers and Atlanta Falcons NFL games with dad.

Lazo has had 2 surgeries on his legs in the past year, and he needs more therapeutic exercise to increase strength in his lower extremities.  His doctor and physical therapist say that Lazo would benefit greatly from an adaptive tricycle, which is something that not only would help increase his strength and mobility, it would also allow Lazo to socialize more with peers.  Please be his sponsor!