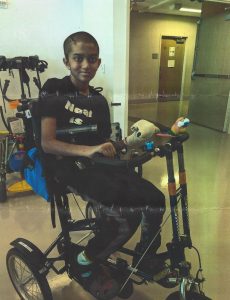 Meet 11-year-old Neal. He was a healthy boy who planned on playing basketball and soccer. Sadly, his life had a drastic change. In October of 2018, Neal suffered from a devastating stroke and he was placed into an induced coma. Doctors could not explain the cause for the stroke, but it resulted in several struggles. He now has left-sided paralysis. He walks using either a cane or a walker. He rides a wheelchair for long distances. His hands sometimes do not function. Neal gets frustrated with these changes, but he remains as positive as can be under his difficult circumstances.

Neal is an intelligent boy with a variety of interests. He is a member of a NASA program which launches rockets made from Lego bricks; Neal enjoys diagnosing problems when rockets fail to lift off. The club represents two of Neal’s favorite topics: Legos and science. He has every Lego set imaginable; Neal’s hands sometimes have problems, and he instructs his family on how to construct a set. His best topic in home school is science; he is enthusiastic to learn how the world around him works. He even enjoys reading instruction manuals. Neal probably would rather play basketball, but life gave him a foul. He gets frustrated when his disability causes a virtual air ball. In the end, however, Neal’s bravery always scores him a victory.

Neal needs an adaptive tricycle to improve his overall strength, stamina, and motor control. Please be his sponsor so he can be active and happy!