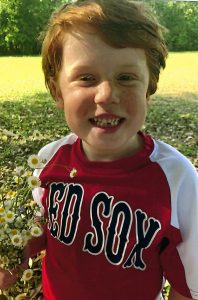 Meet six-year-old Noah. The young boy’s mom noticed that he was not running and jumping like other children his age. The doctor was concerned and scheduled tests for Noah. He was eventually diagnosed with Duchenne Muscular Dystrophy, a progressive illness causing muscle weakness. This relentless condition makes Noah’s life difficult. He has infusions each week to maintain his muscle integrity. He is becoming less active even with the infusions. Walking short distances get harder with each year. Transferring from one place to another is even affected. These growing limitations discourage Noah and physical activity is less enjoyable. He remains strong and works hard to get through his disability.

Noah has fun in several ways. He watches television and movies; his favorites are Paw Patrol and Black Panther, respectively. He has cool tastes in music. He listens to classic rock, especially Tom Petty. He reads the book series,  the Adventures of Paddington Bear. Noah, despite his increasing weakness, plays T-ball. Each hit of the baseball has more meaning when he fights to reach the next base. His family cheers all the way.  For Noah, scoring a run is more than just a point in a game. Running home is racing away from his limitations and going straight into the arms of his family.

Noah is requesting  a therapy tricycle to slow the progression of his diagnosis and delay the need of a wheelchair. He lights up and becomes  more vibrant when using a trike during therapy sessions. Having one at home will greatly improve his quality of life. Please be his sponsor.