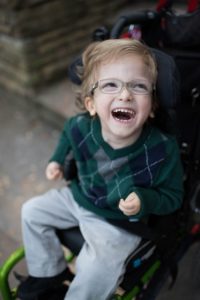 Meet four-year-old Oliver. This precious boy had a rough beginning when he was born with a brain hemorrhage. He developed cerebral palsy and numerous challenges followed. Oliver is cognitively underdeveloped and nonverbal, although he is currently learning to communicate using technology. Oliver has poor muscle control in his upper body. He also cannot walk or stand. These limitations do not prevent Oliver from being as happy as any other child his age.

Oliver enjoys activities that are simple but fun. He likes anything with music. He will randomly hum songs ranging from the Star-Spangled Banner to Jingle Bells. He attends prekindergarten and plays with his classmates—his favorite part is going outside and blowing bubbles. Oliver and his dad spend quality time together by watching Pittsburgh Steelers football games. The family also takes Oliver to aquariums where he is mesmerized by varieties of lovely fish. Nothing is as beautiful as Oliver, though. He is best described as adorable. Oliver is the only one of several brothers who has curly hair. He makes cute noises and then laughs at the sounds. Oliver, most importantly,  smiles throughout the day because he knows that living is the best reason to be happy.

Oliver needs a medical stroller to provide proper support and comfort while making transportation easier and safer.    Please be his sponsor!