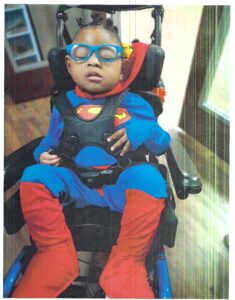 Meet three-year-old Shawn. He was born a healthy little baby, but sadly that changed a few months later when he began having seizures. He was eventually diagnosed with cerebral palsy and a seizure disorder. Shawn is confined to a wheelchair, but he is a happy boy despite his obstacles.

Shawn has a number of interests. He enjoys watching the shows Bluey and Paw Patrol.  He listens to anything with soothing sounds, his favorite being the sound of falling rain. He has fun with books and toys that make noise. He also enjoys going outside or exercising during water therapy. Shawn has more interests, but he is best defined by his personality. He is a strong-willed child who is determined to meet his goals. He loves being around people. Shawn is a joyful boy who adores being cuddled. He is aptly named in some cultures. Shawn defines a gift from God.

Shawn needs a Leggero medical stroller with a recline feature. This equipment will make transportation easier while also providing better support and comfort. Please be his sponsor!