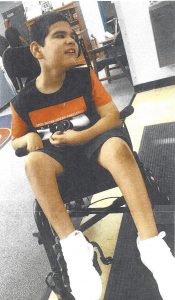 Meet nine-year-old Adrian. He was diagnosed at birth with cerebral palsy. The illness caused many trials that no child should endure. He was having 50 seizures a day until a procedure on his brain ended the convulsions. Adrian is also cognitively impaired and nonverbal. He is, however, proficient at   saying “No!” Adrian has more obstacles, including not being able to walk or stand. Instead, he is independent by scooting around on the floor. Adrian is very happy  despite his overwhelming illness.

Adrian has fun in a variety of ways. He enjoys watching shows and movies with music; his favorite film is the animated hit Moana. He attends school and is like most students—he cannot wait for lunch period!   The food he enjoys most, probably made at home with love, is rice and beans. Adrian also has fun sitting and bouncing on a trampoline. This young boy has another unique interest. He adores flirting with women. He meets a beautiful woman and likes to pull her hair. He laughs and then acts coy by looking away.  The twinkle in his eyes reveal his intention; to be adorable. It works, too. He has a way of melting hearts.

Adrian received his stroller recently. Having an adapted stroller makes life so much easier for him and his family. It can be used for short outings of for places where a wheelchair is just not accesible! He is comfortable and safe with all the accessories he needs in his new stroller. Go out and explore the world Adrian!