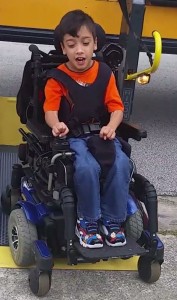 Angel was fortunate enough to get a power chair donated to him but it needed modifications. Wheelchairs 4 Kids stepped in and arranged for and paid for the modifications. The alterations are allowing him to have better positioning for improved posture and better functions for improved driving.

Seven year-old Angel is a brave boy who was diagnosed with cerebral palsy and spastic quadriplegia. He is non-ambulatory. Disease, however, has not impaired his ability to be a child.

Angel is as playful as any other boy his age. He loves to pretend and act in creative and imaginative roles. Spending time with family playing memory games such as Sorry is a favorite activity of Angel’s. Angel also loves listening to soothing music to help him feel cheerful. Accomplishing this goal includes playing songs by the Christian vocalist Jamie Grace. A lyric from one of her popular songs describes Angel: “He’s a fighter who inspires…”