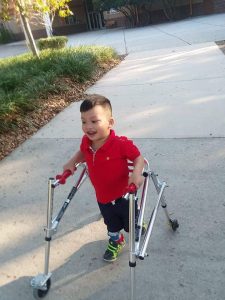 Meet six-year-old Bentley. His mom was concerned that he was not meeting normal milestones, like talking and walking. He was eventually diagnosed with cerebral palsy. Many challenges follow Bentley. He is cognitively equivalent to a two-year-old. He is also nonverbal. He struggles walking but is working hard to make improvements. He remains happy despite his tribulations.

Bentley necessarily has a limited array of interests, but the important thing is that they make him smile. He enjoys movies and television shows with music. His favorite is trying to sing along with the Disney film Sing. He also enjoys doing outdoor activities, including swinging and swimming. He gains an appetite after an afternoon of swimming. His preferred food is rice. Bentley could devour a mountain if it was made from rice! Bentley doesn’t ask for much. And he needs even less to be happy. A song, a swing, or the sunshine. Bentley teaches us that we can be happy with life’s simplest pleasures. The world would be a better place if we followed his example. 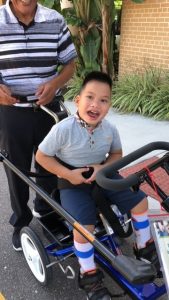 Bentley received his trike and was ready to go. As soon as he was on his bike he excitedly began singing: “row, row. row your boat!” as he went up and down the sidewalk. The smile on his face said everything we needed to hear. Keep going Bentley, work on your leg strength!