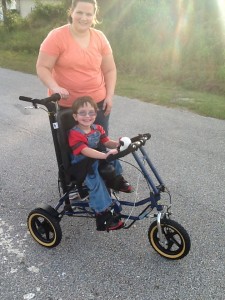 In December 2013, Hunter received an adaptive tricycle from Wheelchairs 4 Kids! Hunter’s mom said, “He got to ride bikes with his brothers for the first time and he smiled, laughed, and giggled the whole 9 blocks. Thank you so much, he is in heaven,” about the first night he had his adaptive tricycle.

Hunter, a.k.a. Iggy, is three years old and was diagnosed with Spina Bifida, Hydrocephalus, and Arnold Chiari Malformation. Until now,  his mobility was restricted to using his wheelchair, a walker and crawling short distances. Hunter can pull himself upright but his leg muscles are weak and he often falls. Now, Hunter has an adaptive tricycle which helps to improve the muscles in his legs. Furthermore, Hunter’s tricycle gives him  more independence and mobility and now he is able to take neighborhood bike rides with his family.

Hunter attends a school for special needs children and has made many friends. However sometimes children without disabilities don’t understand and are too afraid so they avoid Hunter, which saddens him and breaks his mom’s heart. Hunter has interests like any other boy his age. He loves to read Dr. Seuss books.  He grins reading about Thing One and Thing Two.  He also likes Whoville and all the fun Whos.  Hunter’s favorite food in the whole world is a warm and juicy hot dog. Hunter usually gets a man sized appetite after doing his favorite activity, pedaling hard on a bicycle during physical therapy sessions. He feels great after working out his legs and fights to be a strong boy.

Hunter has a resilient spirit that shows through his optimism and determination. He is an inspiration to his family who love him so much.  This three year old boy illustrates, through example, a lesson we sometimes forget. Never give up on life and stay true to those you love. 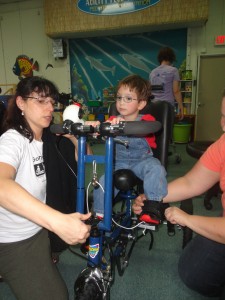