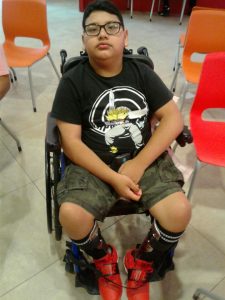 Meet 10-year-old Jesus. He can be described as a miracle child. Hims mom underwent an emergency c section six months into the pregnancy. Jesus suffered from oxygen deprivation after his birth. He spent two months in intensive care and doctors believed he would not survive. His parents watched over their sick little boy the entire time. Jesus pulled through the ordeal, but not without complications. He was eventually diagnosed with Spastic Quadriplegic Cerebral Palsy. Jesus is cognitively challenged and confined to a wheelchair. He not only survived these struggles. He thrives.

Jesus is full of life and love. He enjoys having imaginative battles using over 500 action figures, including WWE, Star Wars, and Avengers. He has a huge grin sitting in the middle of his collection. Jesus also likes going to school and playing with his friends. They even formed a pretend rocking musical group complete with a drummer and guitarist. He wishes to someday have his own electric guitar and drum set.

Until then, he is thrilled to be the group’s lead singer. Jesus sings his favorite soft love songs as an exercise during speech therapy. He is said to have a superstar’s voice! More importantly, Jesus adores his family. He does his best to protect them like a guardian angel. He asks for nothing in return, except for lots of hugs. Meet Jesus and understand the meaning of kindness and joy.

Jesus has a very sedentary life because of his limitations. He desperately needs an adaptive tricycle to promote better overall fitness. He will also have a great time riding the trike.

Jesus recently received his therapy trike. Mom was so excited she stayed home from work to be able to join him on his first ride! Each time Jesus rides his trike he will be receiving additional physical therapy which will help his leg muscles get stronger as well as his core muscles. It will also improve his balance and overall cardiovascular endurance. The best part? Jesus will just be having fun like all his friends!