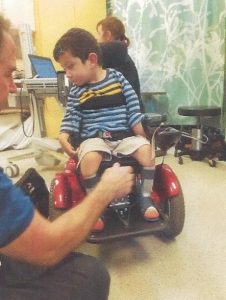 Meet four-year-old Jorge. He was diagnosed with a very difficult illness that causes severe congenital joint contractures. Jorge, as a baby,  was not able to move anything below his neck. He has made improvements, but his legs are fixed in a single position which make walking impossible. His arms also have limited movement. Jorge is incredibly strong despite his debilitating illness.

Jorge is very active. He sings to his favorite movies and music. The performer Daddy Yankie especially puts the young boy into a good mood. He loves going to school and playing with his friends. Jorge also has a fun time riding around in his powerchair, which he calls his motorcycle—it’s not hard to imagine him saying “Vroom! Vroom!” as he zips around a neighborhood. Jorge prefers spending sweltering summer days swimming and splashing in a pool. Most importantly, Jorge has an amazing spirit. He recently had foot surgery and smiled afterwards as if he just awoke from a peaceful nap on a normal day. Jorge is even described as somebody who lights up a room. Once his smile is gone all the oxygen vanishes. Jorge gives everybody in his life meaning and joy.

Jorge needs a manual wheelchair which will permit him more accessibility than his heavy powerchair. Please be his sponsor so he can be more independent! 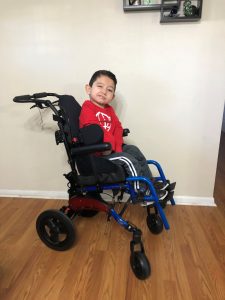 Jorge received a manual wheelchair and the world in his! He is so happy to have access to even more places than before. With ease of transportation for this wheelchair Jorge and his family have more options available to them when they decide to go out!