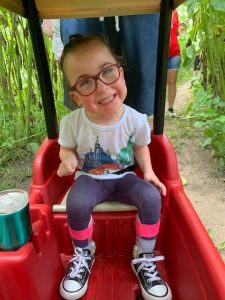 Meet five-year-old Josie. She’s a triplet and born premature with her other siblings. She weighed less than two pounds and spent several months in the hospital. Josie was diagnosed with Spastic quadriplegic cerebral palsy. She is nonverbal and communicates with noises and gestures. She walks with assistance. Josie is a spirited girl even with her illness.

Josie is a character. She and her family watch lots of movies. Josie’s favorite is Frozen. She tries to sing along with the soundtrack and lights up with a proud smile when she can hit the high notes. She loves music; country songs especially put her in a relaxed mood. Josie’s personality, however, makes her shine. She is a little girl who can adopt a no-holds-barred sassiness. Josie lets it known when she doesn’t like something. She is described has having a little old lady’s sense of humor. Inappropriate and hilarious. For example, Josie can sit around a table with adults who are having serious conversations. The slightest thing can happen, and Josie laughs almost to the point of tears. This, of course, gets others to join the good-humored girl. Josie has discovered that a bit of silliness is the best medicine. 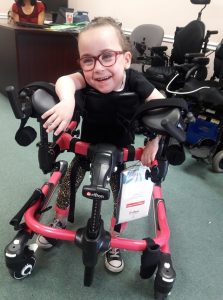 Josie was all smiles when she received her gait trainer. After some initial adjusting to make it just right for her she was ready to try some independent steps. Mom called to let us know she is walking all over the house and was even able to use her gait trainer to walk herself to her therapy. ” She has even become more vocal with this new independence.” said mom.

Thank you for sharing this experience with Wheelchairs 4 Kids! Keep it up Josie!