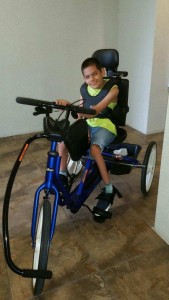 12 year old Julian, who was diagnosed with Cerebral Palsy at birth, needed an adaptive bike to provide mobility whereby he can strengthen his trunk and lower extremities and benefit from outdoor stimulation.  Wheelchairs 4 Kids was able to deliver this bike to him recently!

After receiving the bike Julian and his family were treated to tickets to a baseball game by one of our major supporters…the Washington Nationals! They had a “ball”!

Julian is a happy boy who loves Barney and will squeal in delight when the show comes on TV. He becomes excited when watching cartoons and soccer and his eyes will brighten when Latin music is being played. His cognitive level is that of a 6 month old, so he faces multiple challenges on a daily basis.  Throughout all of his trials, Julian remains determined!!