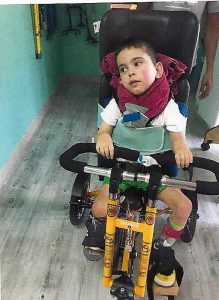 Meet four-year-old Blayne. This little boy has a rough beginning in his young life. He was diagnosed with Spastic Quadriparesis and epilepsy. He is unable to sit upright, roll to his side or support his head. Blayne is also nonverbal. Furthermore, he is required to eat   with a g-tube. Blayne has numerous obstacles, but he manages to find his happy place.

Blayne has fun in the best possible ways. He is very excited to watch his favorite television show, called Super Why. He enjoys everything about the adventure series, including the theme song. He even has a crocheted collection of the characters. His other favorite activity is cuddling with a stuffed dinosaur that has its own g-tube. Blayne’s happiest place, however, is with his older brother. Blayne smiles like life is perfect whenever he sees his hero. Blayne as a difficult illness, but his brother is the cure!

Blayne needs an adaptive tricycle to improve his overall strength while having fun exercising. Be a sponsor for him today! 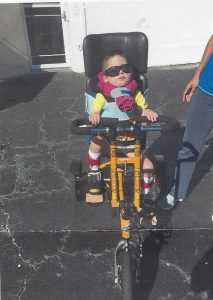 Blayne got his new adapted tricycle and headed out to the road. “It was such a wonderful moment to see him smile while he was ridding!” Said his happy mom. Keep up the good work Blayne! Enjoy your new trike!