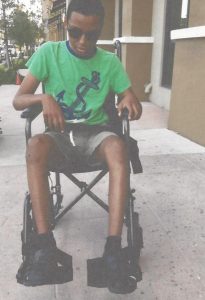 Meet 13-year-old Carlos. He began his childhood healthy and active. Sadly, everything changed when he was five years old and began losing his vision. Doctors performed numerous tests on the frightened boy. He was eventually diagnosed with a progressive illness known as Batten’s disease.  This is a relentless disorder that affects the nervous system. His trials are now numerous. Carlos was able to speak until a seizure rendered him nonverbal. He also lost most of his mobility and cognitive function.  He spent a majority of his childhood in cold and sterile hospitals. Unfortunately, his illness will progress over time. Carlos, despite his grim illness, has a remarkable amount of strength.

Carlos is described as wonderful, and it shows through his drive to have fun. He listens to the Spiderman cartoon. He also likes hearing the classic storybook, Peter Pan. Carlos is outgoing, too. He is always eager to get up in the morning and attend school with his fellow classmates. Furthermore, Carlos is very cuddly. He feels right at home snuggling in a person’s arms. Carlos, most importantly, has a strong faith. He believes in miracles and knows he will be cured from his illness. Miracles, however, can happen in many ways. Meet Carlos and see his everlasting smile. Clearly, his heart is already healed.

Carlos needs a new wheelchair that will fit and provide better support. His old chair is too small and uncomfortable. Please be his sponsor to keep him happy and comfy! 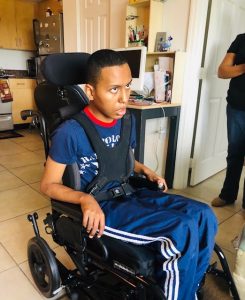 Carlos got his own wheelchair! This wheelchair is custom fit for Carlos, his size and his needs. Before this, Carlos was using a borrowed wheelchair that was too large and even dangerous for him to use.  His mom can now take him out for walks in his new wheelchair knowing he won’t fall out of it!