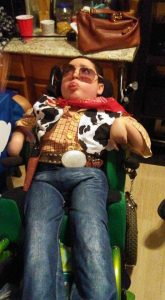 Meet 11-year-old Derek. This young boy’s struggles began with a family tragedy. He was in the car with his family when the vehicle veered off the road and crashed into a lake. Derek’s sister did not survive the crash. The young boy also nearly drowned, but he was revived. Derek suffered brain damage from oxygen loss, which caused many ongoing challenges.  He is cognitively impaired with a learning ability equivalent to a four-year-old child. He endures a dislocated hip and the inability to walk.  Derek is also nonverbal. Furthermore, he eats using a g-tube. Life took a hard turn for Derek, but he pushes forward like a joyful warrior.

Derek is fulfilled in simple ways. He is fascinated with lights and sounds. His favorite toy is an interactive dog that reads a variety of books. He also is thrilled to take showers. The warm water makes the disabled boy feel wonderful, and he gets upset when bath time ends. During the afternoon Derek is home schooled. A teacher helps him to communicate using a tablet or by blinking his eyes. At day’s end, mom plays ambient sounds or soft classical music to soothe Derek into slumber land. From morning through evening, Derek wears the impenetrable armor of joy. Life is a battle, but this child remains the victor. He is a champion to inspire us all.