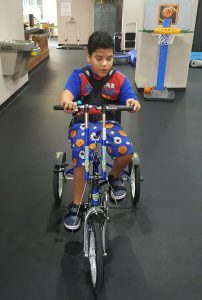 Meet 11 year-old Edward. He was diagnosed with a severe form of cerebral palsy. His cognitive ability is equivalent to an 11 month-old child. He also is unable to speak or eat without using a g-tube. Edward’s mobility depends on using a wheelchair. He has managed to beat the odds despite of his hardships.

Edward was born premature and doctors were concerned about his survival. He weighed only 2 pounds. Baby clothes were too big for his diminutive frame. Cradling him took extra care, as well. The first few months of his life were spent in a hospital. The proud mom and dad finally brought him home. Years later, he not just survived but thrives. Give him a bowl of ice cream and his face lights up with every mouthful. Take Edward to see a therapy dog and each tail wag broadens the boy smile. His strength is unsurpassed. Edward was a miracle at birth. He is also a miracle of life.

Edward needs an adaptive tricycle. He recently had bilateral hip surgery and the trike will help his recovery process and muscle strengthening. Edward will also have fun riding on his new tricycle. Please be a sponsor soon! 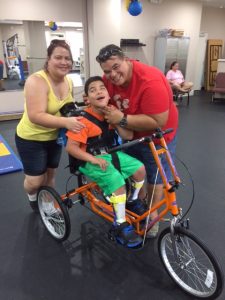 Edward received his bran new trike while at therapy. Everyone was overjoyed to see his bright smile while riding in his very own trike. His therapists were able to show Mom and Dad all the amazing benefits Edward will gain by having his very own trike. Fun, exercise and physical therapy all in one!