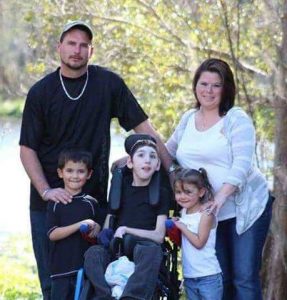 We are so excited for Eric! He received his new adaptive stroller. The 14-year-old was diagnosed with cerebral palsy and his life has been very difficult. He has had hip surgery, a collapsed lung, and pneumonia. Spending so much time in a bed also caused severely contracted stage 3 pressure sores. Many people would not cope well with such catastrophes in a short time, but Eric remains very positive.

Eric is described as a super sweet kid. He is very affectionate and enjoys cuddling. During social gatherings, he is quite a ham. His family cannot help but laugh at his antics. Eric is also a flirt with the ladies. They don’t mind either, because he was given an award for being the biggest flirt. Don’t look any further to find a miracle. Eric has suffered more in a few months than some people do in a lifetime. Yet, Eric has a special way to make other people feel good.

Eric’s adaptive stroller will make it easier for his mom to bring him places. He has a wheelchair that is too large for his mom’s car and previously, she had to carry him into appointments with doctors and therapists.  Go Eric!