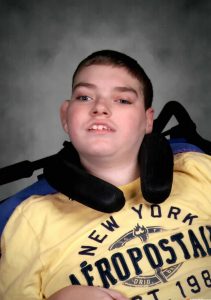 John received his new Rifton Hygiene and Toileting System! He and his family are very grateful for the specialized chair.  John, a resilient teenager, is diagnosed with many illnesses, including hypotonia and seizure disorder. The illnesses have caused him several limitations, such as his inability to walk. The brave boy cannot sit upright without support and is nonverbal.

John enjoys television and music. His favorite program is Star Wars Rebels, but he especially likes bonding with his dad during racing events. His favorite music is country or anything that is upbeat and fun. During the summer John spends time in a swimming pool. Feeling weightless in the water provides him with relaxation. He ends his day by going to bed and cuddling with his best-friend, a miniature schnauzer named Jack. The loyal dog is always by John’s side, eager to make him smile with a wag of the tail!

John’s previous specialized chair didn’t provide enough support for him, making transfers unsafe and difficult. Things are much better now that he has his new chair!