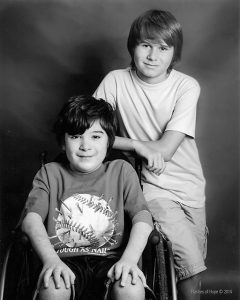 Meet 13-year-old Landon. He was born a healthy baby, until he became sick in 2011. Doctors diagnosed him with several conditions, including Juvenile myositis, a rare auto-immune disease that causes cells to attack the body. He has muscle weakness, pain  and  inflammation. The symptoms also cause Landon to be confined to a wheelchair, but he can walk with amazing robotic technology. The disease is very difficult, but Landon has an iron will to remain happy.

Landon likes variety. He listens to country music, and his favorite is Luke Bryan. He is home schooled, and his passion is science. He also loves animals, especially cats. He has three rescue kitties and he also reads books about the fun felines. He has other pets, including a rabbit, gecko and a bearded dragon. Landon prefers to relax at home playing games on his IPad. During lunch or dinner, Landon enjoys eating crab cakes at Longhorn Steakhouse. He does all of this and more. Landon wakes up in the morning with challenges. He goes to bed with trials. And in all times in between, he smiles.

Landon needs a ramp for safety and independence. His current ramp is inadequate and unsafe. Landon’s mom has to carry him from the house to the car until they receive the new equipment. Please be a sponsor soon for the family. 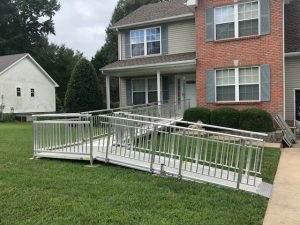 What a beautiful ramp! Landon’s daily routine has not only become much easier on everyone in the family but it is also much safer for Landon. He can now enter and exit his home independently and with ease!