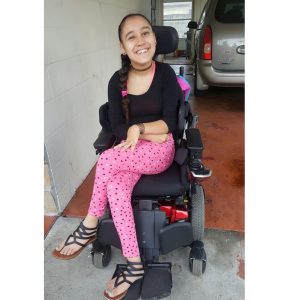 Meet 13 year-old Naomi. She was 6 years-old when a motorcycle hit the young girl and caused her to have a traumatic brain injury. Doctors gave her only 72 hours to live, but she recovered to everybody’s surprise and joy. However, the young girl suffers from many complications.  She was on a feeding tube for 12 months. After several physical therapy sessions 2 hairline fractures were discovered on her collarbone. She cannot walk without assistance. She is also unable to communicate with speech. Naomi’s strong personality is a contrast to her challenges.

Naomi is best described as a vibrant teenager. She loves shopping for purses at the mall. She gives an “okay” gesture if there is a purse that grabs her attention. Naomi displays a sassy signal if she is not interested. She takes exciting vacations to the Universal Studio theme park where she cannot wait to ride roller coasters.  During lazy days at home she relaxes by watching television. Her favorite shows are WWE Divas and Full House, but she thinks that Criminal Minds’ actor Shemar Moore is totally cute. She does a happy dance whenever he is on television. Naomi appears to be an ordinary girl, but include her challenges and she becomes extraordinary.

Naomi is requesting an Easy Evolv stander, which will improve her ability to stand and walk. She is very independent and would be grateful to receive help from a generous donor! 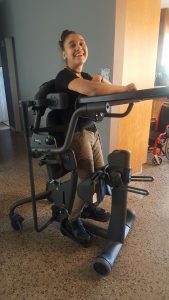 Naomi’s smile says it all..she loves her new Easy Evolv stander. This allows her to go from a sitting position to standing in a safe and secure way. Being upright helps Naomi stretch her hamstrings while she builds up her core and leg muscles.