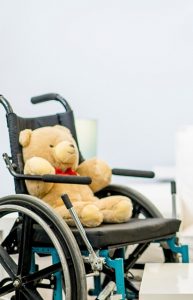 Meet 7 year-old Sophia. She has a traumatic brain injury associated with shaken baby syndrome resulting in several complications such as being cognitively underdeveloped. We are not allowed to share her photo. She once suffered endless seizures which caused her to be legally blind and deaf. She miraculously manages to overcome adversity.

Sophia has a strong personality, and this shows with her refusal to give up on life. The powerful girl can still watch television, movies and listen to music. Some of her favorites are SpongeBob Squarepants and Finding Dori. In fact, Sophia adores aquatic animals, and she has many pet fish that she likes to feed. Her favorite style of music is reggaeton, but the song she listens to mostly is “Shake, Shake, Shake, Senora.” Sophia’s indomitable spirit is reflected largely through her ability to improve. She came out of a coma. She conquered her seizures and has not endured an episode in 4 years. She has fun despite being legally blind and deaf. Mom describes Sophia as a rebel. The courageous girl certainly has been defiant against her limitations.

Sophia needs an adaptive tricycle to improve her strength and stamina. She will also have a good time riding around in the tricycle. Be a sponsor for her today!

Sophia loves her new adaptive trike! She has been ridding every day since it arrived. Enjoying the outside is only one of the benefits of having an adaptive trike. Sophia is also getting added exercise helping strengthen her leg muscles and core muscles, improving her balance and posture.