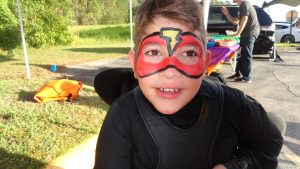 Meet 8 year-old Tashal, who was diagnosed with cerebral palsy. He was born premature with a brain hemorrhage that caused the illness. Doctors were unsure of his outcome. Years later and he is a cheerful boy.

During pregnancy mom placed headphones on her belly and played classical music. Today, Tashal loves this genre of music, and he can even name every composer. He also enjoys bonding with dad by throwing and catching a ball. Tashal spends weekdays at school learning his favorite subjects, math and science. He keeps healthy by taking swimming classes. Tashal feels good being submerged in a pool’s refreshing water. This young boy has become vibrant and enthusiastic. His outcome is unquestionable. He is our inspiration!

Tashal needs an adaptive tricycle to improve his leg strength and stamina. The trike is also another way he can have fun while exercising. Be a sponsor for him soon!

Tashal is having a wonderful time on his new trike. It has taken some time getting used to pushing the pedals but he as already managed a half mile bike ride!