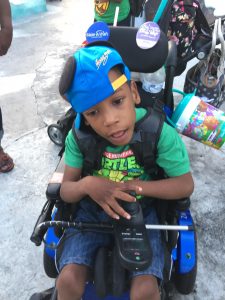 Meet six-year-old Richard. He was diagnosed with cerebral palsy. Richard is not able to walk; he uses a motorized wheelchair for independence. Richard does not allow this and other challenges to keep him down.

Richard’s interests appear that he is a normal boy. He is a fan of the Marvels Avengers movies. He watches soccer and football; his favorite team is the Detroit Lions. He enjoys television, especially American Ninja Warrior. Richard plays video games galore. During lunch, he is hungry for peanut butter and jelly sandwiches. Grape, of course! Richard spends time with his friends, too. Richard even reads and engages in conversations about what he learns in books. All of this and more make Richard seem like a typical boy. Meet him in person, however, and he becomes unforgettable.

Richard needs a therapy tricycle to improve his overall strength and stamina. He will also have fun riding on the new trike. 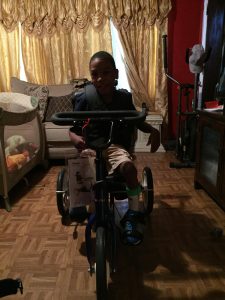 Richard’s mom was so excited to receive the new wheelchair she took it right out of the box and put it together in the living room! As soon as she was done Richard was ready to go for a ride.