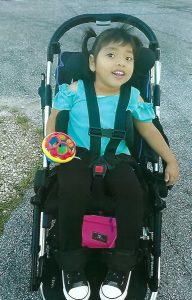 Meet four-year-old Valentina. She had a rough start to life. She was diagnosed with cerebral palsy and a congenital illness caused from the Zika virus. These conditions give her numerous trials. She is cognitively underdeveloped and nonverbal. She necessarily uses a g-tube for nourishment. Valentina is beginning to sit upright and roll over. She is also working hard to stand with braces. Valentina, despite these obstacles, is a vibrant child.

Valentina is best described as a girl who is full of enthusiasm. She waves her arms in excitement whenever music is playing. She loves going to school with her friends and squeals with delight seeing the approaching school bus. Valentina likes playing on swings during therapy. Valentina  smiles and kicks her legs as soon as she sits on a swing. In fact, this little girl rarely stops smiling. Her inner joy has a positive effect  on anybody in her life. People pick her up and a bond is instantly formed. Putting her back down is impossible. Valentina is truly a magnet of magic!

Valentina needs a therapy tricycle to increase her leg strength, stamina, and balance. Hopefully, this will improve her ability to stand and maybe someday she can even walk. Please be her sponsor!

Valentina received her therapy trike right in time for Christmas! She has been happily going on rides, exercising her legs and gaining the much needed muscle strength. The crisp air blowing through her hair make her laugh and giggle during her ride!