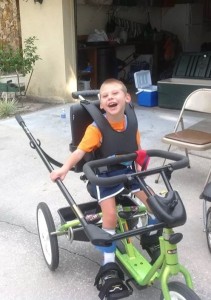 Weston used an adaptive tricycle during his intensive therapy and had such a great time with the fun exercise that it was determined that he needed one of his own to use at home. Wheelchairs 4 Kids got Weston a Rifton Adaptive Trike! Now that he has his own adaptive tricycle Weston’s muscular strength, stamina and mobility are increasing.  Additionally, Weston has found new ways to bond with his brothers by taking bike rides together in the beautiful outdoors!

Weston is a five-year-old boy who has cerebral palsy and many daily trials. Weston has never been able to walk.  He also has difficulty holding up his head and sitting up independently but Weston is working very hard during therapy to strengthen his muscles. Furthermore, Weston has difficulty eating solid food and has a g-tube to ensure that receives all of his necessary nutrients.  Despite Weston’s hardships, his family describes him as a happy boy who loves to go outside!

Weston enjoys music, especially the down-to-earth southern sounds of country.  He also likes watching Curious George and an occasional sports game on television. However, Weston’s favorite activity is spending time outside where he has fun watching his two older brothers play.  With the help of Wheelchairs 4 Kids Weston is enjoying the outdoors even more! 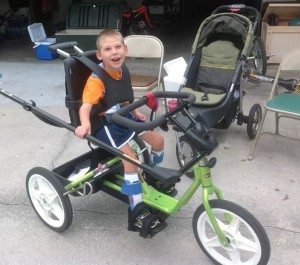