Meet 12-year-old Yael. His life began under difficult circumstances. He struggled  breathing after his birth and lived in intensive care for two weeks. His health recovered and he was developing normally for about two years. Unfortunately, he returned to the hospital after having a dangerously high fever. Yael was eventually diagnosed with hydrocephalus. Doctors also believed that he would not live past the age of seven without a bone marrow transplant. Yael has an amazing brother who was a match and gladly became the donor.  The procedure kept Yael in the hospital for two years. His hardships continue to this day. Yael is confined to a wheelchair. He is also cognitively challenged and nonverbal.  Yael, however, remains happy despite his tribulations.

Yeael likes to relax and avoids being overly stimulated. His favorite activity is watching television. He loves educational shows about animals, shapes, and colors. He also enjoys putting together puzzles. Most of all, Yael is very attached to his mom and dad. Yael cried when he recently went to school for the first time and had to leave his parents. He gives  them hugs and kisses when they say “I love you.” Yael’s mom describes him best, “He has won us all with his heart.” 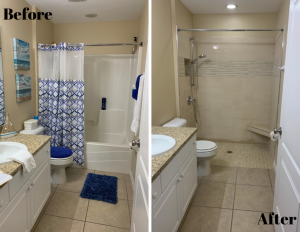 Yael finally has a safe and easy shower to use. This is such a blessing for this family. Yael got so heavy it was impossible for them to lift him from the bathtub!