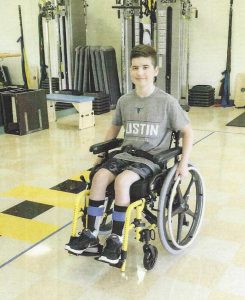 Meet 14-year-old Devin.  He suffered a traumatic brain injury on July 4, 2016, after a devastating accident involving a car and a golf cart in which he was a passenger.  His path to recovery has been a long one, but Devin is a fighter.  As a result of his TBI, Devin has developmental delay, and spends much of his time in his wheelchair.  He isn’t walking independently, but he has made progress using his gait trainer.

Devin’s PT said that an adaptive therapy trike would do wonders for his leg strength and coordination and would be key in his journey toward greater independence.

Thanks to the generosity of the Miami Elks, Devin has received his custom-made therapy trike and is already out riding and working on regaining leg strength, which will hopefully help him re-learn to walk independently.  Way to go, Devin! 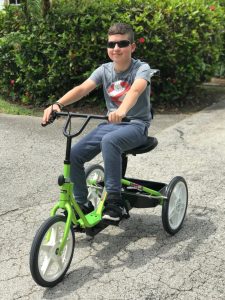