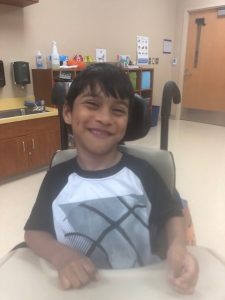 Meet eight-year-old Carlos. He was eight months old and not meeting typical milestones, including rolling over and sitting up. He underwent testing and was eventually diagnosed with cerebral palsy.    He has numerous challenges due to the illness. Carlos is nonverbal, although he currently uses an electronic device to communicate. He also requires complete assistance to walk short distances. Carlos remains a happy boy despite his limitations.

Carlos is able to have fun in many ways as other kids his age. He watches cartoons like Masha and the Bear. He peruses through Netflix and always looks for new Minecraft content.    He enjoys being in his stander while going outside to take walks with his mom. Carlos also loves school. He is even eager to be in front of class to write on the blackboard. His favorite subject, however, is music class. He enjoys life despite his daily struggles. Carlos does not see his disability as a battle, though. This makes him an inspiring child. His mom describes him best, “Carlos is a precious gift from God.”

Carlos needs a power wheelchair to provide him with independent mobility. Please be his sponsor!