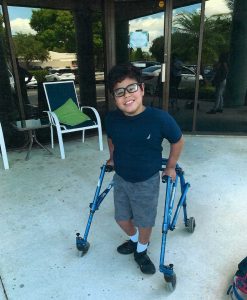 Meet 10-year-old Daniel, who was born several weeks prematurely. He had numerous complications after birth and spent six months in the hospital. Daniel was diagnosed three years later with cerebral palsy. The illness causes him to have mobility challenges. He used to have a scissor gait and walked on his toes, but these were improved with determination and practice. Daniel currently uses a reverse walker, but he can move around the house with little assistance. He has leg braces to help with  strength and balance. Daniel is also mostly nonverbal, but he has learned how to communicate his feelings in other ways. The young boy is full of life despite these setbacks.

Daniel has a variety of fun interests. His favorite show is a South Korean animated series title Tayo the Little Bus. He listens to upbeat Spanish music. He is an avid reader and has a complete set of Barefoot books. He is a tennis fan. Daniel recently had a birthday and got a racquet and tennis balls. He also has a best four-legged buddy, a dog named Jax. Daniel takes him for a walk each day before school and then later in the afternoon. The boy has so much energy that he rarely sits still in one spot. He is creative, too. Daniel makes his own unique Tic Toc videos. One thing is certain. Daniel does not know the meaning of disability. Instead, he defines limitless possibilities.

Daniel needs a therapy tricycle to improve his leg strength, balance, and stamina. These enhancements will aid his ability to walk. The trike can even be a fun way for him to play with friends and family. Please be his sponsor!