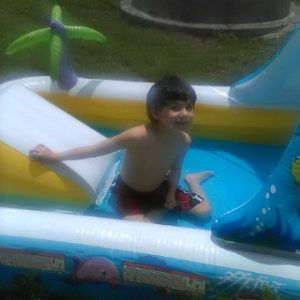 Meet seven-year-old Gabriel He was diagnosed with cerebral palsy and epilepsy. He also has a rare illness known as Guillan Baree syndrome, in which the body’s immune system continually attacks the nerves. Early symptoms include tingling and weakness of extremities that deteriorates over time. He had a procedure a couple years ago in which the brain hemispheres were divided, causing only the left side to be functional; he was kept out of school for a year after the operation. He suffers from severe seizures, and his abilities differ on a daily basis. He sometimes feels great and can walk and speak with some difficulty. Other times, Gabriel is having a bad day and he gets frustrated not being able to do his normal activities, like walking or talking. Gabriel remains in high spirits despite his harsh circumstances.

Gabriel works hard to have fun. His favorite show is The Power Rangers, and he thinks the red ranger is the coolest! He listens to any type of music and tries to dance while holding somebody’s hand. This boy has an active imagination that is useful when he plays with his collection of action figures. Gabriel attends school, too. He recently was excited when he came home from school and exclaimed, “I can spell my name!”   Gabriel sometimes gets tired and seeping on a mat by his side is a loyal Great Pyrenees dog named Duke. Most importantly, Gabriel wakes up with a smile and determination that never ends. Nothing keeps this brave boy down. Not even three illnesses can match his one heart.

Gabriel needs a therapy tricycle to improve his overall leg strength, stamina, and balance. He will also have fun riding the trike. Please be his sponsor!