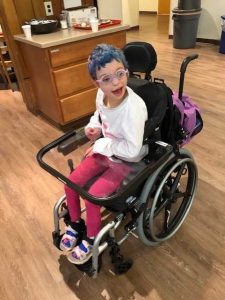 Meet 12-year-old Ana. She was diagnosed with a chromosomal disorder known as Wolf Hirschhorn Syndrome. The side effects are numerous and difficult. Ana’s growth and cognitive development are delayed. She is nonverbal. Ana also uses a walker to move short distances. Ana spent much of her childhood in hospitals, enduring surgeries while other kids were playing carefree. Ana is very happy and lovable despite her illness.

Simple pleasures are important to Ana. She listens to upbeat children’s songs. During music class, Ana bangs on instruments as though performing for a grand audience. In fact, she loves all toys with sounds. Ana also likes anything that is tactile. Her favorite is stroking the soft fur of the family dog. None of these activities compare to what she enjoys doing the most, cuddling. Hold Ana and she smiles as if her disability just disappeared. The feeling is mutual, too.