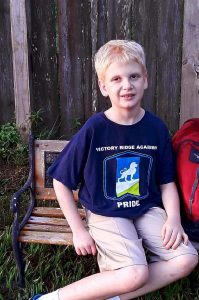 Meet 10-year-old Cohen. The young boy appeared to be healthy when he was born. However, Cohen’s parents noticed that he was not meeting typical markers—he was still not crawling at a year old. He endured numerous blood tests and was eventually diagnosed with a rare genetic disorder known as Xia-Gibbs syndrome; only 100 people worldwide are diagnosed with the condition. Cohen has numerous challenges resulting from Xia-Gibbs syndrome. He is cognitively challenged and his speech is limited to a few words and sentences. Cohen also becomes stressed if around large crowds. These and other hindrances have not stopped Cohen from enjoying his childhood.

Cohen can be described as fun. He likes dancing to Johnny Cash songs. His favorite activities at school are recess when he can play on the swings or ride a tricycle like a speedy race car driver. Cohen is also very curious. He breaks objects just to see what’s inside—an activity that no doubt dad loves! Cohen even plays special needs baseball, but his little sisters assist him in hitting the ball and running around the bases. It’s hard to tell who has more fun! Most of all, Cohen is loveable. He could spend the entire day cuddling with his family. He even snuggles with his best friend, a gentle German Shephard. Meet Cohen. He is a boy whose heart knows no bounds.

Cohen needs an adaptive tricycle for use at home to improve his leg strength, stamina, and balance. He will also have a great time with his trike. Please be his sponsor!