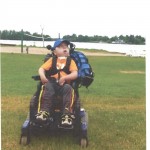 There are children suffering from multiple severe disabilities that can only be overcome with unimaginable strength of spirit. Cohen is a six-year-old boy who lives with the heartbreaking burdens of having Cerebral Palsy, Quadriplegia and Idiopathic Scoliosis. These sterile terms reflect a nightmarish reality that most people cannot imagine. Cohen’s arms and legs are paralyzed. He also has a tube in his stomach for nutrition and another tube in his neck for breathing.

As a result of Cohen’s disabilities, his daily life is much different than most kids his age. For example, most children are able to communicate with family and friends and are able to ask for a cookie or to play outside. However, Cohen cannot verbally communicate.  Instead, Cohen blinks his eyes for “yes” and turns the head for “no.” These are daunting difficulties, but Cohen fights each day to live his life. He enjoys watching his favorite football teams, the Wisconsin Badgers and the Green Bay Packers, and does his best to cheer alongside other cheese-hat wearing fans!  Cohen also loves taking bicycle rides with his family. The wind on his face is like magic when all of his disabilities seem to be replaced with a wide smile of joy. Cohen’s family, especially his best friend and brother, always strive to make their little Braveheart happy. Children like Cohen live with inconceivable pain but are surrounded with an even greater amount of compassion. This is the real magic.

Cohen is in desperate need of a Telecab elevator. He lives in a two-story home and is getting too big to carry up and down the stairs. Please help Cohen and his family. They are worth it and more.