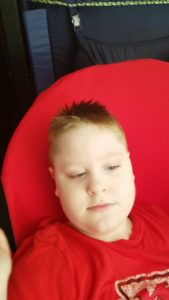 Meet eight-year-old Dillan.  He was born prematurely and suffered complications after his birth. He endured a hemorrhage, seizures and developmental delays that set back his normal progress. He was diagnosed with cerebral palsy, epilepsy and visual impairments. Dillan is cognitively challenged and nonverbal. He cannot sit upright without support. Furthermore, he is blind. Dillan also has sensory sensitivity and he is upset by too much stimulation. He is a strong-willed and happy boy despite these limitations.

Dillan makes it known what he likes. He only wants mom to read his favorite book during story time, called “I Love You So.” Dillan watches various television shows, including cartoons and sports. He especially likes football and roots for the Kansas City Chiefs. Dillan shows excitement during games by blowing raspberries. Be warned, however. Dillan protests when the tv is shut off.   He is also particular when being tucked into bed. This task is made just for dad. Before going to sleep, Dillan cuddles and kisses his dedicated dad. The young boy also has a sense of humor. He enjoys mocking sounds that he thinks are funny. In this way, He makes everybody laugh. Dillan is a character.  He fights for what he wants. Most of all, he fights simply to be happy.

Dillan needs a ramp for his home. Currently, leaving and entering home is difficult. The new ramp will make going out easier and safer. Please be his sponsor!