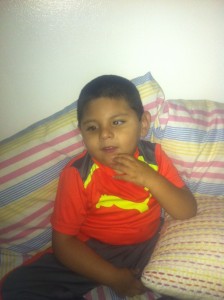 Meet four year-old Herman, who was diagnosed with spastic quadriplegia. As a result he is not able to walk. Sadly, he is unable to operate any type of wheelchair on his own, either. Herman, however, remains a contented child who has fun.

Herman is entertained just like any other boy his age. His favorite television character is Barney. The sweet and lovable dinosaur distracts Herman from all challenges and disease becomes something from the past. During hot Florida afternoons Herman can be found splashing in cool water. This activity is very therapeutic and Herman loves the feeling of being refreshed! Herman also loves to end his day with a soothing bedtime story.

Herman needs a Supine Stander. The device will promote important bone growth and muscle strength. Please be a sponsor for Herman!